Over here across the Savannah there’s an old road that makes for a great Sunday drive. In no time at all, you can see historic sites, get the feeling you are in the mountains, and yet feel you are at the coast, all at the same time. More than that you’ll come across the ghosts of historic characters, some of whom will surprise you. 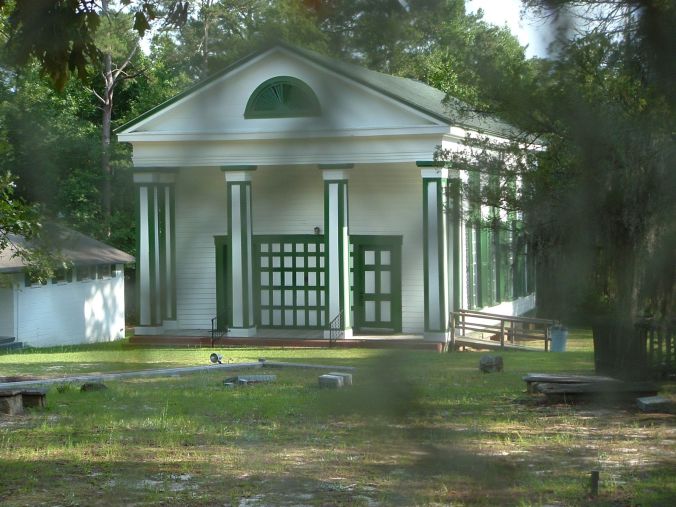 Old SC State Route 261, birthed by an Indian path and widened by public act in 1753 became “The Great Charleston Road.” What feet have trod this path that connected Charleston with Camden. Festooned with old churches and plantations this passage hosted a Civil War diarist, governors, Revolutionary and Confederate generals, and just off its path a man rests eternally, a man we should think of come Christmas.

A historical marker at Route 261’s junction with Highway 378 greets travelers, saying, “Over it came Indians, pack animals laden with hides, drovers, rolled hogsheads of produce, wagoners, and stagecoaches. The armies of two wars passed over it.”

Some called it “The King’s Highway,” and it barely missed (thankfully) being a thoroughfare to the state capital—a good thing because to travel 261 is to step into the past. In the 1780s the South Carolina General Assembly decided to move the state capital from Charleston to the state’s central region. Stateburg lost by a handful of votes to Granby’s Ferry, which later changed its name to Columbia.

Today, as then, State Route 261 winds through the High Hills of Santee. This area is rural, isolated, and heartbreakingly antebellum. Here and there the land plunges opening up vistas of distant ridges. You think at once of the mountains. It’s a curious sight to see Spanish moss in the mountains but that’s what Highway 261 gives you in the High Hills: massive oaks with limbs trailing draperies of Spanish moss. The coast is far, far away and yet the oaks here assume a feathery persona … they look like large bird wings and maybe they should as you’ll see for there’s a rare breed of artist here in the High Hills of Santee.

In the Stateburg historic district alone, you’ll find enough history to fill several good-sized books. For starters there’s the Church of the Holy Cross. This stately old church was built from 1850 to 1852 of rammed earth, a technique for building walls that compacts earth, chalk, lime, and gravel into concrete-like hardness. 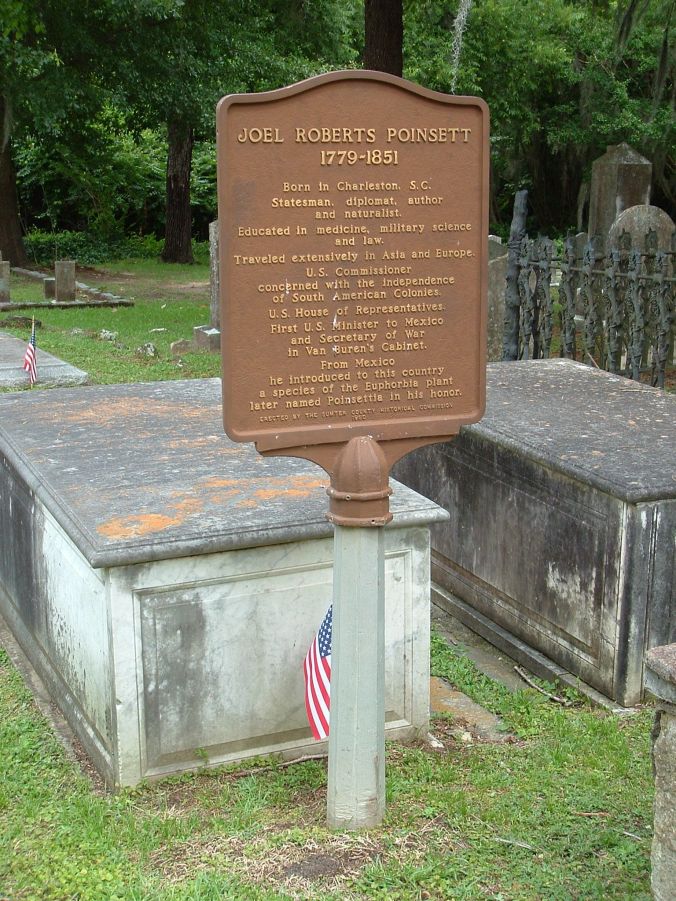 In its old cemetery, which is one of the more beautiful cemeteries I’ve seen, lies Joel Roberts Poinsett, the man who brought us the poinsettia. He was a botanist, physician, and statesman who served in the U.S. House of Representatives and the first United States minister to Mexico. It was there that he saw the noche buena, the red-leaved plant that would carry his name.

Across the road from the church you’ll find the Borough House Plantation. This beautiful home was destined to share ties with war and war’ generals, those fellows who move the chess pieces about. The original home, built in 1758, served as the headquarters for British General Lord Cornwallis and American General Nathanael Greene during the Revolutionary War … at different times of course. The second house built here in 1820 was the birthplace of Confederate General Richard H. Anderson. His father was Dr. William Wallace Anderson. Joel Poinsett, by the way, came to pay Dr. Anderson a visit and while there he died. Thus did he end up in the cemetery across the Highway 261.

Just a ways down the road and a bit off the beaten path you’ll come across the grave of General Thomas Sumter, the “Carolina Gamecock.” He earned his nickname following his rampage during which he killed British soldiers for burning down his house.

Those of you who recall Ken Burn’s Civil War documentary will recognize the name Mary Boykin Chestnut. She grew up in Stateburg a stone’s throw from Route 261. Mary Boykin Chesnut, born Mary Boykin Miller, published her Civil War diary as a “vivid picture of a society in the throes of its life-and-death struggle.” She described the war from within her upper-class circles of Southern planter society, but included all classes in her book. Her Civil War (1981) won the Pulitzer Prize for history in 1982. Literary critics refer to Chesnut’s diary as “a work of art” and the most important work by a Confederate author.

Recently I was a guest at the home in Statesburg where Mary Boykin Chestnut grew up. I was there interviewing Grainger McKoy, noted wildlife sculptor. You could say McKoy has xylem for blood vessels. Wood has driven his evolution from childhood on. “As a young child, I marveled at my father notching cypress logs as the cabin in which I grew up in took shape.” An old decoy his grandmother gave him moved something deep inside him. His mother held him up by his belt so he could saw an exterior log end from that cypress cabin. From that log end he sculpted his first bird in 1960. That’s when he “peered over the edge of the nest into the world of sculpture” as he puts it. All that family support played a prominent role in his art. “Your true inheritance,” he says, “is what’s left that you can’t spend.” You can’t spend family support. It’s priceless.

As a pioneering sculptor, McKoy became interested in having his birds escape wood. The pursuit of the flight of birds in wood became his passion. Whereas other sculptors portrayed a bird sitting inertly, McKoy wanted to bring his to life. McKoy’s sculptures of a bobwhite covey rise and sanderlings in flight “defy belief as well as gravity.” To see his Carolina parakeets in flight is to see an extinct species spring to life before your eyes.

McKoy long climbed uphill in an art world that refused to recognize wood as a classical art medium. Nevertheless he persisted, setting the bar high, ever challenging himself. He sold his first piece for $75. In 1974 his first exhibit took place at New York’s American Museum of Art. Today he’s invited to exhibit in prestigious museums and people pay him handsome commissions for original works. And those original works take shape just off Route 261.

An interesting detour. One “April” William Ellison Jr. owned the same house McKoy lives in. A free man and former slave Ellison achieved success as a cotton gin maker and blacksmith prior to the Civil War. He became a major planter and one of the state’s largest property owners. At his death Ellison held 60 slaves and more than 1,000 acres of land.

Ellison supported states rights. He and his sons supported the Confederate States of America and donated substantially to the Confederate government. A grandson fought informally with the regular Confederate Army. Ellison died December 5, 1861, and his family continued to support the Confederacy throughout the war as he wished. The Ellison family grew food for the Confederate Army and invested significant amounts of their fortune in Confederate Bonds, worthless of course when the war ended. What a surprising twist 261 gives us here.

Not far from McKoy’s studio and home you’ll find the hamlet of Boykin Mill Pond. There you’ll see a quaint old church, the Swift Creek Church. It has a sad story to tell. Oh the tears that fell onto its pews and heart pine floors. In May 1860 approximately 75 young people met on a Saturday at Boykin Mill pond to picnic right near the church. Late that afternoon 30 or more crowded onto a flatboat. Too many got aboard and it overturned. Those who could swim tried to save the lives of those who could not, but close to 25 young people drowned, mostly women.

You’ll find an old mill here too. One by one old mills continue to vanish but Boykin Mill and its 100-year-old turbines keep rolling on preserving a time when mills provided nearby communities cornmeal, grits, and flour.

There’s a lot more to Route 261 and Stateburg but I’ll save that for another day. Should you ever want to make an interesting trip the next time you head to Myrtle Beach, drive Route 261, the old King’s Highway. If nothing else the sheer isolation will give you the feeling you are in the 1850s. The only thing that breaks the spell is a golf course just off the old road.

As I drove along the winding oak-shaded lane I avoided looking at the golf course. I was envisioning other things, things from our past. It would not have surprised me one bit to come across a horse and buggy with men in powdered wigs and women in Colonial attire. Add some Redcoats with muskets and that scene would have been complete. Then that scene gave way to a regiment of Confederates marching down the road, the dust rising and hanging in the air. The men are tired, tattered, and dejected. Back, visiting her childhood home, Mary Boykin Chestnut looks out her bedroom window and sees broken men pass by … She reaches for her diary as all, one by one, vanish into the eternal mists we call history.

6 thoughts on “The Old South Rediscovered”