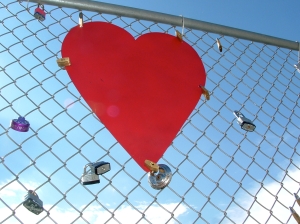 About five years ago a lovely phenomenon took hold in Europe. Couples wrote, etched, painted, and scratched their names onto padlocks and latched them to fences and railings on bridges. They hurled the keys into the river, canal, what have you. “Nothing can break our love.” In particular, the Pont des Arts footbridge over the Seine in Paris gained renown for this ritual. Only an intrepid scuba diver or bolt-cutting interloper could destroy their love, and that would take some doing. Just imagine all the keys resting on the bottom.

People love to join a movement. In the City of Lights, so many people memorialized undying love on the Pont des Arts footbridge a five-foot span, overwhelmed with the crushing weight of love, collapsed. City officials, as city officials are wont to do, closed the bridge and issued a ban on the love ritual. Critics re-labeled the romantic act as vandalism. An outcry from the masses demanded the ritual continue.

Nothing new here. Who has not carved his love’s initials in a beech tree? Who has not written a lover’s initials into wet cement? And now and then we hear of the soul who had his lover’s name tattooed onto his arm setting up a major case of ink regret down the road.

How about you? Dreaming of flying to the City of Lights to lock your love in perpetuity on the Pont des Arts footbridge? Don’t bother. The last I heard city officials still frown on the ritual. No need to fly 4,226 miles across the Atlantic to lock your love down. No need to fret either. Just drive to the Lake Murray Dam. There for all to see are locked-down symbols of unbreakable bonds, for Paris’s “love locks” have crossed the Atlantic to festoon the Lexington County-side fence. Hundreds of them hang from the cyclone fence. What captures your eye are the emotional messages.

I drove over to the dam on a sultry September afternoon. Billowing thunderheads shot into the sky, their images reflected onto Lake Murray. As I drove over the dam to the Lexington County side locks glittered in late summer sunlight. I was hoping to catch someone in the act of putting a lock on the fence, but alas, only a few walkers and joggers braved the oven-like heat.

A friend and I walked the fence line, reading the inscriptions. The locks celebrate romance, the birth of babies, and sadly they offer up sentiment for the dearly departed. One lock gave the birth and death dates of one soul along with the words, “God Only Knows.” One lock secured a giant red heart to the fence. Two locks had sparkling glitter glued to them. Others were adorned with beautiful fabrics and one even had a sting of seashells attached to it. People express love in creative ways, and the fence amounts to an art gallery. If you go, see if you can find the antique lock covered in rust. It’s a lock from yesteryear that requires a key like great grandparents used. I surmise that older generations go for this Pont des Arts footbridge thing.

The heat was brutal and storm clouds were gathering that would drop over two inches of rain in fifteen minutes. My friend and I left. As we did, I looked across the big water white with powerboats’ feathery wakes. Soon the wakes vanished leaving no trace they had ever existed, much like love does for ill-starred lovers. I wondered, knowing as we all do that love is fleeting, just what happens when a lock-commemorated love dies. The flesh is weak as the old verse goes.

I thought of the story about a man who found the wallet of his best friend beneath his marital bed. A divorce ensued. And then there was the happily married woman who slid her foot up the pants leg of a co-worker at a table, giving him a knowing wink. And there was the traveling salesman, married, of course, who printed up fake business cards for the women he met on the road. When assignations, shenanigans, and subterfuge come to light, what then? What should a woman or man do when they discover that the lock they fastened to a fence symbolizes deceit? Perhaps one day someone will see a soul walking to the damn fence with bolt cutters.

But why dwell on the negative. Love locks will continue to prettify the fence. It’s a weighty matter but for now, the SC Highway Department says the locks on the fence at Dreher Shoals Dam are safe. It won’t surprise me though to hear that the fence collapses from the crushing weight of love. It’s a weight that crushes a lot more than fences.