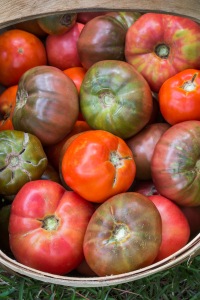 Robert Clark and I were on the road running down a story, a story about land, a farmhouse, and tomatoes, a story of war, old ways, and survivors of sorts. On a hot, humid July morning we abandoned I-20 for Longs Pond Road and after a back road or two arrived at a farmhouse near the community of Boiling Springs. Two big blackjack oaks stood out front. Out back, a handsome, clapboard smokehouse looked lonely, its fellow outbuildings long-fallen comrades. “The other buildings were too far gone. We tore down the old cow barn in the summer of 2007,” said Derrick Gunter, the owner of this historic acreage in classic Sandhills Country.

Derrick grows heirloom tomatoes here in ancient sea bottom and he knows his history. (In fact, he teaches it.) Those trees of the Old South, blackjack oaks, almost never get much size to them, but Derrick’s did. He believes they may be the oldest blackjacks in the country. And you could say the trees know a thing or two about the Civil War. About thirty yards past the blackjacks, a low spot runs down Derrick’s property line on across Calks Ferry Road. As saplings, the blackjacks were standing when Sherman and his boys came through on the way to Columbia. Right near those trees Sherman and his troops bogged down in that low spot, a February rain-fed quagmire. The Union troops offloaded cannon balls and minnie [Minié] balls to lighten their load and better get through the morass. Several lifetimes later, Derrick’s grandfather found a cannon ball and “a shoe box full of minnie balls” alongside the road, a story that illustrates how much better supplied the North was than the South.

Another war came along and when housing construction exploded after World War II most homes were built of brick. The Hallman family built Derrick’s 1951 farmhouse with its German siding; it’s probably the last true farmhouse built in South Carolina. The house was built with cut nails and the walls were constructed with 4 by 6 un-planed studs. The house was built of about 90 percent heartpine.

“My dad got the property after a bachelor son died in 2004 and the house soon went to probate,” said Derrick. Derrick’s dad bought the farmhouse nine years ago. “I financed the reconstruction on the house and the land was gifted to me by my dad,” said Derrick.

Derrick began to work on the old home, whose interior sports handsome eastern white cedar tongue-and-groove paneling and real hardwood floors. The main room’s lacquer caramelized long ago when creosote in the chimney blazed up, roaring like a train barreling down the track.

The folks who sold the farmhouse to Derrick’s dad came up through the Depression. “They didn’t throw anything way,” said Derrick. “I threw away thousands of ties that wrapped loaves of bread.” Derrick and his dad had to make seven trips hauling off things like thousands of Duke Mayonnaise and peanut butter jars. They even found a 1920 receipt from Georgia for the Stuart pecan trees growing out back, $6.50 for six trees. Many folks who grew up in the Depression didn’t throw anything away. They had a mantra: “Keep something seven years, and you’ll find a new use for it.”

Derrick’s dad gifted him some land adjoining the farmhouse and that led to a decision. How best to spend summer days. Derrick teaches U.S. History at White Knoll High School. He has his summers free. “You’ve got all that time off in the summer,” said his mother, “why don’t you grow peanuts?”

“The land was cleared before I moved into the farmhouse during 2009. That was before I got married. In 2011, I was questioned about growing peanuts. I researched heirloom tomatoes and planted them instead. Then his dad passed along some sage advice. “Don’t grow peanuts. It’s a lot of work and will drive you crazy. Grow tomatoes,” he said remembering a Russian heirloom tomato a neighbor up the road had brought them. Derrick knew the tomato his dad was referring to. He had made a sandwich from it. “Best tomato I’ve ever eaten.”

That Russian heirloom? It’s called a “Black From Tula.” It’s a big “black” tomato with 3- to 4-inch, slightly flattened, oblate, dark brown to purple fruit. It has deep green shoulders. Its flavor is heavenly, rich, slightly salty, with a smoky-fruit flavor. Another popular heirloom is the Marion, developed by the Clemson Extension Service in 1963. “Old timers love it,” said Derrick.

Derrick started out with 20 plants, a test run featuring eight varieties. Four failed but four did well. History enthusiast Derrick forged ahead. “When my son Jackson Lee—I named him after Robert E Lee and Stonewall Jackson, whom I consider the best two generals in American history—was born in 2013, it didn’t deter my expansion of growing tomatoes. Farming was foreign to my wife since she grew up Rock Hill but she has adjusted quite well to this kind of life.” Today, Derrick grows mainline varieties with names as colorful as they are. Cherokee Purple, Black Krim (Crimean), German Johnson, a pink tomato, and the most colorful name of all, Radiator Charlie’s Mortgage Lifter.

“Radiator Charlie,” said Derrick, “owned land. That was the only thing he had. He had ethics and common sense but no education. He had will power and made a success of himself.” Radiator Charlie’s story is one of more than making do, of finding a way not just to survive but prosper. In the early 1930s, Marshall Cletis Byles was going through a tough time in his hometown of Logan, West Virginia. He ran a small repair shop at the bottom of a mountain, a good location, for the mountain was famed for overheating trucks, sending them steaming and hissing back down the mountain. He got a lot of business from trucks that never made it to the top, thus the moniker “Radiator Charlie.”

The Great Depression was making its presence known and Byles decided to develop a large tomato families could feast on. Though he had no training in plants he knew what he liked. He started with a German Johnson, Beefsteaks, an unknown Italian variety, and an unknown English variety. He grew plants from each variety and planted three Beefsteaks, three of the Italian variety, and three of the English variety in a circle. In the center, he planted the German Johnson.

Using a baby syringe, he cross-pollinated the German Johnson with pollen from other plants in the circle. He saved the seeds and planted them the next year. He selected the best seedlings and planted them in the middle of a circle, surrounded by the other seedlings. He repeated this strategy for six years, cross-pollinating the strongest plants in the center with pollen from plants in the circle. He ended up with a pretty good tomato and sold the seedlings for $1.00 each, a nice sum in his day. People drove hundreds of miles to buy his seeds. And here’s why. Radiator Charlie’s Mortgage Lifters are red and pink, amongst the most flavorful heirloom tomatoes, and big, averaging 2 to 4 pounds. They bear fruit in about 80 days, are perfect for slicing, and produce an abundant crop. On top of that they resist disease and produce until frost does them in. Radiator Charlie, unlike all those trucks, climbed a mountain of his own and ascended to legend. Growers like Radiator Charlie and Derrick Gunter free you and me of red, perfect, tasteless grocery store tomatoes.

Most American heirlooms trace their heritage to the mountains of Tennessee, North Carolina, Kentucky, Virginia, West Virginia, and Ohio. Yes, Ohio has mountains. They do well in these areas because of the climate. Down here, heat and humidity are heirlooms’ enemies. Derrick’s do well he says because “I nurture them.” That he does. You can make the case that the cycle of nurturing starts with the preparation of seeds, but we’ll discuss that last. Let’s start with planting.

In spring, he puts in twenty hours a week. He digs holes, plants, and lays down mulch. He prefers rye or wheat straw for mulch. Such mulch really cuts down on weeds. He gets his mulch from Stanley Shumpert, Lexington County’s last dairy farmer and his uncle.

He grows plants organically, though he points out that he isn’t “certified organic.” He plants marigolds as a natural pesticide. “I haven’t used any insecticides at all this year,” says Derrick. Marigolds deliver other bonuses. They attract beneficial wasps and pollinators and repel deer and nematodes.

He uses fish fertilizer on the plants. With the heavy lifting behind him, Derrick works six and a half hours a week during the growing season. When he’s ready to plant them he rinses them in water with just a touch of bleach to kill any pathogens present. A week before Valentine’s Day he puts the seeds in “grow soil” beneath grow lights. “After a month, they go into bigger pots,” said Derrick. “The first of April they can go into the soil.” Derrick plants one variety per row. Tomatoes are self-pollinators. Each plant has both sexes needed for pollination. Isolating tomatoes can reduce cross-pollination but wind and bees will still cross-pollinate them.

Now comes the growing season, the nurturing season’s apex when rain is a blessing, a time that makes many a kitchen a better place, a time that makes restaurant owners happy. “Naturally, one to two inches of rain per week is preferable,” said Derrick. “However, that’s not usually the case. If you are going to water your plants, it’s best to use a slow drip system. I avoid directly watering the plants from the top. That speeds up fungal problems.” He passes a tip along for us would-be growers: “It’s better to underwater than overwater.”

All the nurturing produces vines bejeweled with tomatoes of varying colors result, not the monochromatic red so prevalent in non-heirloom varieties. From these not-so-round heirloom tomatoes come savory flavors. Among them, Derrick seeks the progenitors of next season’s plants.

“I go to the middle of the row and pick out the biggest, healthiest tomatoes for seeds. Once he collects the seeds, he puts them in a cup of water in a jar. He shakes it to break up the gel that coats the seeds. The next step is to place the seeds on paper towels where they dry. When they’re good and dry, into the refrigerator they go until planting time. That’s when the real fun begins for those who love a classic sandwich thick with slices of summer’s savory heirloom tomatoes slathered with Duke’s mayonnaise.

“An heirloom tomato,” says Derrick, “is a heritage variety that has been lost to hybridization that’s red, round, “perfect,” and tasteless. This prompts Derrick to quote the late Andy Rooney. “The federal government has sponsored research that has produced a tomato that is perfect in every respect, except that you can’t eat it.”

Heirloom tomatoes serve up a lesson about people. In our image-crazed society, pretty people generally get a lot more attention than they deserve, sort of like round, red, perfect tasteless tomatoes. How easily we overlook what really matters. Plain people, often relegated to the background, quietly go about their business making the world a better place.

As for Derrick Gunter? Well, he made a good decision when he chose to plant heirloom tomatoes, not peanuts. Consider him a bit of a preservationist. “The benefit of the heirloom is remembering the past and securing the future,” said Derrick. “When you’re dead and gone, your family can enjoy the exact same thing you enjoyed. We as a society, by preserving our heritage produce in a fast-changing world, give others a never-changing world. Something that stands the test of time.”

Any fully ripe pink or black or mixture heirloom tomato

Salt for 45 minutes to draw water out

Fry in vegetable or peanut oil

One thought on “Black From Tula & The Mortgage Lifter”