Guess how much a gallon

You can drive by a place 1,000 times and be unaware of its history. Such was the case for a small country store on Highway 378 in Edgefield County. Over the years I’ve passed the little store you see with this column 1,000 times and not once did I stop. That changed Sunday, October 13. I did pass it but I turned around, curious to see what the price of gas was on the old rusty pump, leaning like an old man with a cane. 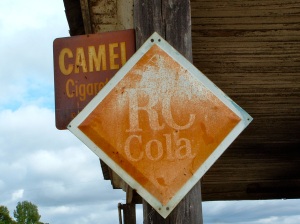 Classic Signs Of The Times

I got out with my camera and the classic RC Cola sign immediately distracted me. Behind it was another vintage sign advertising Camel Cigarettes. American Pickers would like this place I thought. I moved closer to get the shot you see here. That’s when a man slipped up behind me.

“If you think I’m selling those signs you’re wrong.”

Startled, I said, “No, I just wanted to photograph the old gas pump and the signs caught my attention.”

“People try to buy them all the time,” he said.

“It’s a wonder someone hasn’t stolen them,” I replied.

“Maybe I’ll file off the nail heads,” he said and then he paused. “My granddad got killed in that store.”

And then the most incredible story unfolded, a story made for TV, a story that goes back to 1941. The little store at the intersection of Highway 378 and Highway 430, a road that leads to Edgefield, a road known as Meeting Street, holds deep, dark secrets.

In 1941 Roads were unpaved and in many areas electrification had yet to arrive. Men still farmed with mules. Times were tough and people were rough. Back then it must have been an upsetting thing to lose say, a calf. Yes to lose a calf was to lose an investment. When a mule wandered from one Edgefield County farm into the pasture of an adjacent farm it kicked a calf, killing it.

Someone had to pay for it.

That someone was the granddad of the fellow standing beside me. “Yep, my granddad was shot in the back for $500. Right in there,” he said pointing at the store’s old wooden siding.

Murderpedia, an online encyclopedia devoted to those who kill others documents this tale of dead livestock and lives gone wrong. It quotes a report that appeared in EdgefieldDaily.com, which I provide here as the facts have been vetted.

“The story began in September of 1940 when Davis Timmerman’s mule got into Wallace Logue’s field and the mule kicked and killed Logue’s calf. Logue demanded that Timmerman pay him $20 for the calf and Timmerman agreed. Logue later went to Timmerman’s rural store and decided he wanted $40 in restitution instead of $20 and Timmerman refused to pay.

Logue became infuriated, grabbed an ax handle, and began beating Timmerman. Timmerman pulled a gun he kept hidden in a drawer, shot twice, and killed Logue. Timmerman was said to have locked the body in store and, despite being seriously injured, drove to Edgefield to report the shooting to then Sheriff L.H. Harling.

Sheriff Harling, Coroner John Hollingsworth, and Solicitor Jeff Griffith drove back to the store. Based on their interpretation of the evidence, Timmerman was held over for trial. After the trial the jury ruled Timmerman acted in self-defense and he was acquitted.

Logue’s widow, Sue, and his brother, George, didn’t agree with the jury’s verdict. They hired Joe Frank Logue, George and Wallace’s nephew, giving him $500 to find somebody to kill Timmerman. Joe Frank was an officer with the Spartanburg Police Department and he hired Clarence Bagwell to do the job.

A year after Wallace died; Joe Frank and Bagwell went to Timmerman’s store. Joe Frank waited in the car while Bagwell went in and asked for a pack of cigarettes (some say it was a pack of gum). When Timmerman turned to get the item Bagwell fired five shots at point-blank range with a .38 caliber revolver, killing him instantly.

Joe Frank and Bagwell returned back to Spartanburg and carried on as if nothing happened. Unfortunately for the pair, Bagwell was a heavy drinker and during one of his binges bragged to a young woman that he had made $500 for killing a man.

The woman went to police. When Bagwell was questioned, he learned that he had been seen at Timmerman’s store on the day of the murder. Other reports say he was spotted casing the store prior to the murder as well. Either way, feeling trapped, Bagwell confessed and fingered Joe Frank as well.

It turned out Joe Frank wasn’t a dutiful nephew after all. He admitted hiring Bagwell, and also told the authorities that the money had come from his aunt and uncle, Sue and George Logue.

But someone had warned George Logue that the law was on the way. Logue and a sharecropper, Fred Dorn, ambushed the two officers. Sheriff Allen died after being shot in the head and Deputy Clark was shot in the stomach and arm. Clark was able to wound both men before staggering from the house and making his way to Highway 378 where he was picked up by a passing motorist.

With dozens of officers surrounding the house, and officials wanting to avert further bloodshed, they appealed to then local Circuit Court Judge Strom Thurmond, a Logue family friend, to try to reason with the Logues. Thurmond walked alone across the yard and into the house. The Logues followed his advice and surrendered a short time later.

Four months later, George, Sue, and Bagwell were tried for Timmerman’s murder. The three-day trial was held in Lexington County with Solicitor Griffith serving as prosecutor.

The jury took only two hours to convict the trio.

On Jan. 15, 1943, Sue Logue was electrocuted. One book reports that Strom Thurmond accompanied Sue on the trip to the “death house” and had relations with her during the trip, according to Thurmond’s driver interviewed for the book. (TP: She had been a teacher in the school system when Strom was superintendent. A tale goes that Sue and Strom were caught in the act, flagrante delicto.)

Sue Logue was the first and only woman to die in the electric chair in South Carolina.

Less than an hour after Sue was executed, George and Bagwell took their place in the electric chair.

Joe Frank Logue received the death penalty for his participation in the killing and his execution date was set for Jan. 23, 1944. He ate his last meal and was prepped for the electric chair. Shortly before midnight, Gov. Olin D. Johnston visited Joe Frank and as a result of that visit, Johnston commuted Joe Frank Logue’s sentence to life.

Within 10 years, Joe Frank Logue was given a job with SLED as a bloodhound handler and trainer. In 1960, 37 of the state’s 40 sheriffs supported Joe Frank’s bid for parole.

When it was all over, nine lives were destroyed.”

T. Felder Dorn wrote a book about this tale of revenge, of murder for hire, The Guns Of Meeting Street. Bound to be a riveting read.

All those times I passed the store I had no idea such a story of mule-mad-mayhem had taken place there. I’ll never pass that way again that I don’t think of the murders and Sue Logue who was quite concerned about her appearance. On the evening before her execution she cried softly as her long black hair was shaven off.

Oh! I almost forgot. The price of gas on the old pump was sixty cents a gallon. That pump must have last dispensed gas circa 1974, about the time I first passed this store where a mule’s kick set a series of tragedies in motion.

30 thoughts on “How A Mule Kick Killed Eight People”