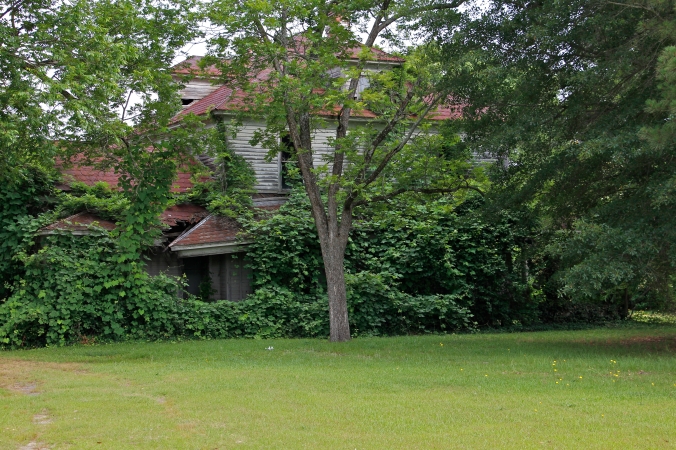 Why Do Homes Become Abandoned?

Driving the backroads I see many an abandoned home. I feel a strange mix of sadness, admiration, and mystery when I happen upon forsaken homes. I get curious too. How does this beautiful detritus come to be?
To see a grand old home no longer occupied reminds me of the aging Hollywood star, who, unable to reclaim her looks or look in the mirror, shut herself away in a penthouse where she died. Old homes, the fading stars of dwellings, die alone too.

I see dying homes wherever I go … Georgia, South Carolina, and North Carolina, my oft-traveled states. We have two problems in this country that prove baffling. Homeless people and people-less homes. Doesn’t add up on the surface does it. It’s more than a bit naïve, however, to think that homeless people could dwell in these refugees from better days. Long-abandoned homes simply have too many problems, although in the city homeless people sleep in all sorts of abandoned structures.

Here’s a question. “At what point does an appreciable investment become worthless and left behind?” Just as a recently abandoned woman can be complicated, so is explaining how homes end up forever empty. No easy answers here, just theories for the most part.

I have limited knowledge when it comes to abandoned homes. I’ve never known anyone to give up on a place and cut and run. So, I did what I always do when a topic puzzles me. I research it. Here then, are some reasons we come across the bones of an old home drying in the sun whereas other drown beneath a sea of vines and vegetation. (I must say that very few of these reasons seem to be the cause of the abandoned homes I come across.)

Homes become abandoned due to natural disasters. Ok, some of the homes in New Orleans post Hurricane Katrina come to mind but none here in Georgialina.

War and civil conflict are reasons. Well, strike that off the list as homes here go.
Ecological disasters. All right Chernobyl qualifies, but again we don’t have that problem here.

Economic boom and bust. When the automobile came along Detroit boomed. Today, abandoned homes litter the city. This reason makes sense as small abandoned farmhouses go. I see a good many of those and wonder if agribusiness and huge commercial farms squeezed out the little guys. I see homes, too, that no doubt aged to the point that bringing them up to code just made no sense. Still, some abandoned homes seem capable of recapturing former glories.

Financial crisis. In times of economic hardship, some people just give up and let creditors take over their homes. This dire option seems preventable to me. And if creditors foreclose on a home, it seems they wouldn’t abandon it would they? 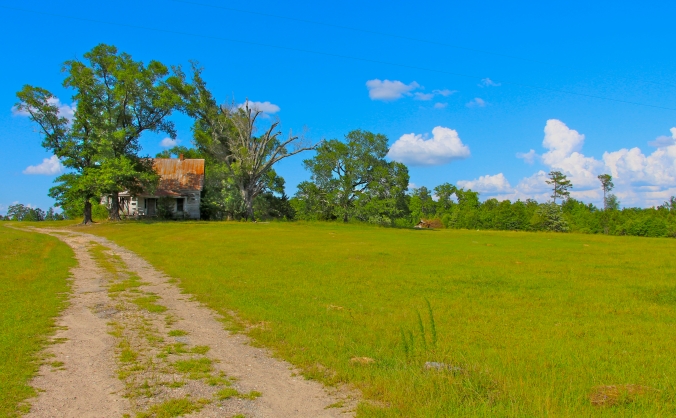 I believe one reason I see so many abandoned homes is because no one inherited them. But that means that sooner or later local government will take it over when the property tax isn’t paid. Right? Then again, many homes might require too much expense to make them marketable. The solution? Forget them like a bad love affair and move on.

One thing’s certain. An abandoned home decays quickly. It starts with the roof. If it’s near woods, trees drop hundreds of pounds of leaves, pine needles, and seeds on it each year. Left to accumulate and decompose, they weight it down and wash downhill with rain to the gutters where they stop them up. Water weighs eight pounds per gallon, and that stresses the roof big time. A leak forms. Over the course of time, water leaches the glue from the plywood causing it to warp. The roof literally falls in. The rain can get in now, and water ruins the interior. Mold grows. Trees take root inside. Nature reclaims space that was once hers.

Meanwhile shiftless types spot a house that no one cares for and they steal the copper out of the building, ripping and tearing the walls and conduit. If it’s in a bad neighborhood, people hang out in it and bust holes in the sheet rock. Graffiti defaces the interior with obscenities and such. Pretty it’s not. I’ll take an abandoned home in the country over the city any day.

Whatever leads to a home’s wasting away, I find it blesses the countryside with beauty and a reminder that nature, not man, prevails in the long run. Meanwhile these homes fade into a place I call “Abandonment, The Land of Beautiful Detritus.” All are rich with memories … if only someone familiar with them will pay them a visit and remember better times.