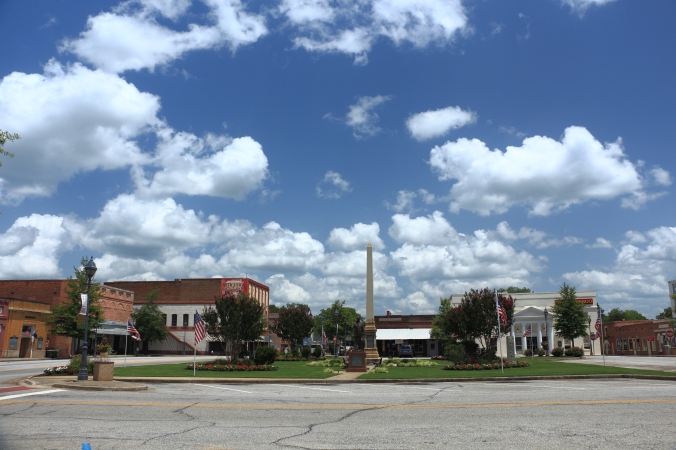 Where We Started—The Edgefield Square

Adventures And Adventurers Are Still Out There

It was brutally hot and humid. My starched white cotton shirt clung to me like saran wrap. Not the best day for going afield but that was the plan. Ten adventurous women and I set out beneath a searing sun to explore western South Carolina. All would go well except for one little thing.

This adventure really began April 17 in North Augusta at Sweetwater Baptist Church when I gave a talk to the Chicks That Click. These women are serious about photography and they’re good. Not long after I presented the stories and images in South Carolina Country Roads, Carol Grady asked if I would lead the group on an expedition. I said I would and Cherrie Alexander began emailing me about what it would take to make this adventure a reality. Soon we had a plan in place.

Monday, June 25, we convened at the Park and Ride at Exit 5 off I-20. Cherrie arrived driving a black Ford Transit van, Built For People, Places, & Things, and we loaded our gear and piled in. Down Highway 25 we went. That Ford tagline proved true. Over the next ten hours we’d encounter people, places, and things.

Our first stop? The Edgefield Square where morning light bathed red crepe myrtles in a golden glow. The women fanned out photographing buildings, especially the side-by-side Carolina Moon Distillery and Edgefield Baptist Association. What juxtaposition! They turned their cameras on Strom Thurmond’s statue, the Courthouse, and Confederate monument as well.

As we departed Edgefield proper we stopped at a kiln near the intersection of Highways 430 and 25. The Dr. Arthur and Esther Goldberg Groundhog Kiln, built in 2011, carries on the local pottery tradition. A wood-burning kiln, it’s much like those used here 200 years ago. There the women photographed a strange ceramic skull and other things. We headed down Highway 25 anew and Pam Cook told us we had just passed the old Chain Gang Camp. We turned around, parked, and checked it out. We waded through Queen Anne’s lace and knee-high, sometimes waist-high grass, to photograph the main building, built in the 1930s with granite commandeered from the old Edgefield jail. Research indicates the area around the building had been a burial ground before the camp came to be. It’s been used as a burial site as late as the 1990s, with most graves unmarked and overgrown. Holly Bartley came across the grave of Freddie Williams. I could find nothing about Williams. 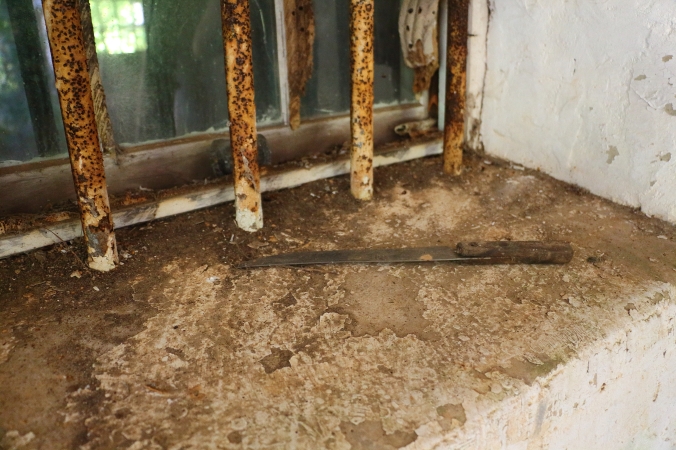 If only this knife could talk

An old butcher knife lay in a window sporting rust-speckled bars, the crossbars hotel brand of hospitality. That ominous touch seemed right. An austere metal cot in a room with cracked green plaster must have accommodated some exhausted souls. Holly photographed a stout metal ring fastened to the floor, apparently a way to chain the gang inside the old camp building. As for the building itself, its step-like façade dredged up a Clint Eastwood western, like some way station in The Good, The Bad, and The Ugly.

Next stop? Price’s Grist Mill. After calming a few dogs that rushed the van, we checked out the mill. A classic old truck sits beneath its shed. Chicks set about photographing the power shaft that transferred falling water’s energy from the millrace joining Stevens Creek. Close by, a serene grassy area looked much like a park. Several photographed a table made from an old millstone and an old tractor shrouded in vines and mystery. Talk has it that that tractor killed John Price, bringing the mill to a close.

The heat asserted itself. It was only going to get hotter. As we made ready to leave, a lawman pulled in. After a few minutes of friendly talk, we headed into McCormick for lunch at Michelle’s. We brought our cameras in from the heat and the back room of Michelle’s looked like a camera shop for Nikon and Canon fans. Upon leaving we spotted the friendly lawman again, and I told him were heading to Badwell Cemetery if he wanted to join us. He laughed but declined. The sleepy town shows signs of awakening. One home was getting a facelift. One sight captured a lot of clicks: a hymn board hanging from a collapsing church’s wall. A chick wondered … which hymns? “Amazing Grace?”

On our way back, we visited the French Huguenot Memorial, Strom Thurmond’s grave, and made a daring but uneventful drive through Murphy Village. 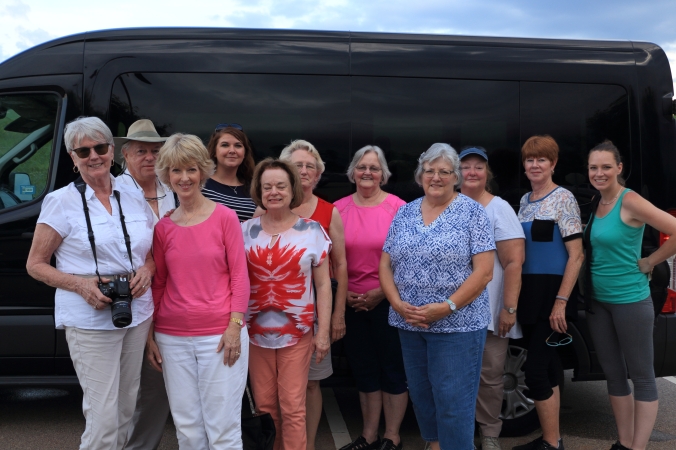 The Chicks That Click hung in there though the heat and humidity. I admire Cherrie Alexander, Holly Bartley, Pamela Cook, Nancy Bufford Daigrepont, Vickie Delrie, Carol Ratliff Elliott, Billie Ellis, Carol Grady, Judy Herron Holmes, and Diana Rees. These intrepid women are adventurers. They saw and photographed each other, places, and things. They survived the heat and never once complained. Heroines, they are.

But what about that little problem we had? Well, among the things we encountered were hordes of chiggers that made easy prey of us. Chiggers work in secrecy and it wasn’t until a day or so later that problems surfaced. I believe we picked them up in the high grasses of the old chain gang camp. As one chick put it, “The Chicks That Click went into the woods with Tom Poland and came back as the Chicks That Itch. Well, at least we laughed about it.

We came, we saw, we photographed … a sandy lane winding through pines to a distant monument, old graveyards, abandoned places, closed businesses, and an encounter with the law. Nancy Daigrepont alluded, “The dusty roads less traveled … overgrown and dilapidated … … vines creeping into every crevice … the haunted spirits watching … may he rest in peace … closed on Monday … They called the law and the law came, (Bobby Fuller Four?), and this: I would love to road trip with you and the Chicks again!”

Carol Grady said, “On Monday, June 25, 2018, ten adventuresome Chicks gathered with their fearless leader, Tom Poland. A veteran at traveling the back roads of South Carolina, the Chicks were ready to follow Tom as though he was king of the chicken coop. He did not disappoint. From town squares, haunted graveyards, a ‘price’ less grist mill, chain gang camp, and churches with tiny bits of information still hanging to their broken structure, we saw it all. Towards Mt. Carmel, a ghost town with beautiful homes that nobody seems to occupy. The conversation on the way to our destinations was lively and filled with stories of the past. A lesson in history and a caution to remember the past—for the future.”

Said Billie Ellis, “Wonderful time had by all. A little heat, and a lot of chiggers can’t stop the chicks. Count me in again.”

Count me in too but next trip I’ll pack along a chigger repellent, an old home remedy or some proven spray. We’re itching to have another adventure, but the chiggers won’t be joining us next time.

3 thoughts on “A Day With The Chicks”