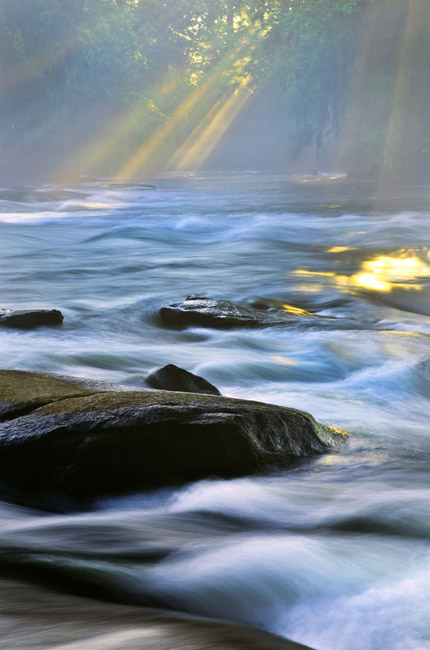 Early Light on the Saluda —From Reflections of South Carolina, Vol. 2, USC Press

Clearing away the receipts, envelopes, and documents that cover my desk I came across my own business card with a woman’s name, Pat, and phone number on the back. It’s no “call me sometime” story.

I met Pat seven years ago. With no family in town Pat gathered with others at a neighborhood restaurant some evenings for conversation to keep loneliness at bay. For those who work all day only to face an evening alone, 6 p.m. to 8:30 p.m. are the loneliest hours of the day.

Edward Hopper’s Nighthawks, one of American art’s most recognizable paintings, portrays a couple and a man sitting at an all-night diner. Whenever I see Nighthawks, I think of lonely people I’ve met and Pat comes to mind. She always seemed a bit melancholy.

Pat talked quietly. She kept to herself. She had a sad demeanor. It so happened she was a fan of books and writers. I spoke to her whenever I ran into her. She’d smile and light up when discussing a book she enjoyed.

She started reading my work and never failed to say nice things. How we love people who make us feel better about ourselves. Pat became my ambassador and bumping into her was always enjoyable. She told others about my work and one spring she introduced me to an out-of-work English teacher who wanted to write a book.

Spring 2014 came and went and summer arrived. Wednesday nights at Bonefish draws a lot of so-called regulars. I’d always see Pat there talking to her friends. June passed into July and one Wednesday night Pat was not at the local Bonefish as was her habit. A friend came over. “Did you hear about Pat?”

Pat had been out with friends one night when she picked up her cell phone and asked, “What is this thing? What does it do?” Everybody laughed … Pat was making a joke. When they realized she was serious alarm set in. Later, after some more out-of-character comments and behavior, they got her to a doctor.

She moved to Rock Hill to live with one of her daughters and it was there that she had brain surgery. Time passed and it was hard for us to get reports about her. A friend wrote her name and cell number on the back of my business card, the one I’m looking at now. “Call her,” she said. “Pat would love to hear from you.”

I called her several times to get what I hoped was a good progress report but all I got was her “leave-a-message” recording. Summer gave way to fall and one day I got an email from a mutual friend. “Tom, would you mind signing your new book (Reflections of South Carolina, Vol. II) and bringing it to Bonefish so all Pat’s friends can write get well wishes in it? I’ll get it to her daughter in Rock Hill.”

I signed the book and wrote a personal note of encouragement. So did her friends. Her daughter gave it to her mother. Time passed and we heard nothing. We called and left messages hoping someone would call back and let us know how things were going. Nothing.

I was working one afternoon when my phone rang. I didn’t recognize the number and I decided to let it roll into voicemail since telemarketers call all the time. At the last second something told me to pick up the phone. It was Pat.

Her speech was labored and she was crying. Among the broken phrases and pauses I made out a few words … “Thank you … for … the beautiful book … I’m sorry … I have … a hard time … talking.” And then she broke down and sobbed and amid all the crying the phone went dead. I told Pat’s friends that I had heard from her but then a lot more time passed.

December 9 I got a message from Pat’s other daughter who had driven cross-state to see her mom. “Pat is my mom and I am visiting her. The book means so much to her. Thank you for thinking of her. She loves it. She is not doing well at all. This is so sad.”

Pat died December 15. She was 68. I had forgotten or never knew that she was a native of North Carolina. Later I learned that Pat kept my book close by to the end. I want to think that it was, perhaps, her last book.

Eighteen days later on December 27 I received another message from her daughter. “We looked at the book together the night before she got too sick to respond … tears. Thanks for being a great friend to her.”

People contact me all the time about my books. Most just want a signed book to give as a gift. I hear, too, from people who are curious. Most want to know how long it took to write it or where the idea came from. Some ask “why did you do this?”

Yes, why. It’s just something to do I suppose. I couldn’t know it but life surprised me with a good reason, though unintended. Giving a friend a way to see the beauty that surrounds her as life ended much too soon.