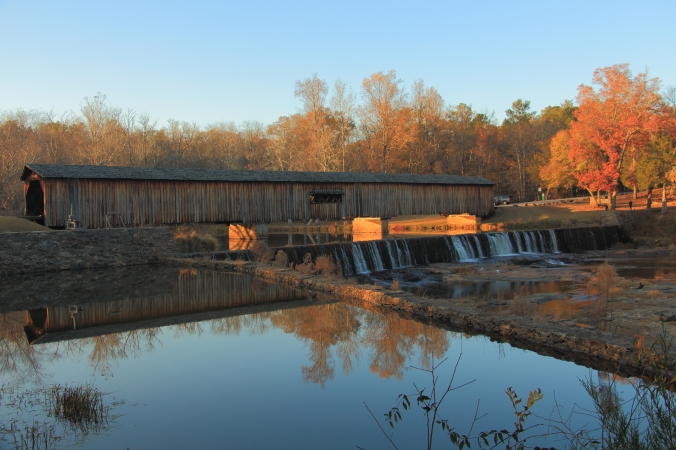 I never saw a covered bridge until I saw The Bridges Of Madison County. That was on the silver screen, though, and my qualification for membership in the “I’ve Seen A Real Covered Bridge Club” remained on hold. That changed suddenly, with a bit of a surprise.

Authentic covered bridges in these parts are rare, but back in February 2007, I came across the real deal: a covered bridge in northern Greenville County, South Carolina. I was there for the filming of George Clooney’s Leatherheads and had some time to kill. I was riding around checking out the countryside. It was late afternoon, that time of day when sunlight comes in so low everything is gold and lustrous and winter’s blue light fades but driving is hard. A bit blinded as I rounded a curve, I got a shock as my eyes adjusted. I saw the bridge I see on a daily basis. Campbell’s Covered Bridge, the bridge in a Robert Clark photograph, which I framed and hung in my home. Suddenly, I was a member of the “I’ve Seen A Real Covered Bridge Club.”

I walked into the old bridge, struck by its narrow width. Beneath the wooden flooring, Beaverdam Creek ran cold and swift, singing to the rocks. Everything was peaceful, the air chilled. I stayed a while trying to envision the many years before when traffic rolled through and no one gave a second thought to the bridge’s uniqueness … nor could they predict what a survivor it would be. 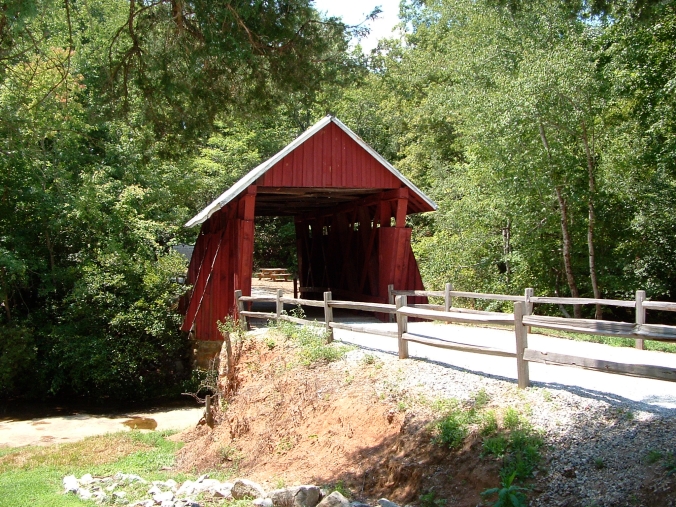 Campbell’s Covered Bridge, worth the drive

The bridge made for a nice spot for couples to linger back in the day, I thought. I walked out from the bridge as darkness closed in, just as a young couple drove up. They looked at me as if I didn’t belong there, and I didn’t. I was an interloper from the future. I was glad to see the old bridge still pulled on romantic souls needing a spot all their own. Glad to see covered bridge romance was not yet lost. Meryl and Clint would agree.

The covered bridge, for certain, is a relict from another era and a lot of book-reading, movie-going women associate it with the The Bridges of Madison County. Robert James Waller wrote the novel on which the movie is based. The movie was set in Madison County, Iowa, which had 19 covered bridges at one time. Only six remain today, all on the National Register of Historic Places. Clint Eastwood directed the film which he and Meryl Streep starred in, but you know that.

This delightful covered bridge sits near the small town of Gowensville. It’s South Carolina’s last remaining authentic covered bridge. Greenville County owns the bridge and closed it to traffic in the early 1980s. It joined the National Register of Historic Places July 1, 2009. South Carolina has 15 covered bridges, but only one is authentic, the one near Gowensville, built in 1909. The rest didn’t come along for 75 years and most are part of public attractions and pedestrian walkways, not an earlier generation’s way to get their buggy or Model T across a swift running creek. Had things not changed so much, maybe The Bridges of South Carolina might have been a movie, and maybe you might have met your special love in winter shadows over a swift, cold creek.