In the country, you’ll come across transportation veterans: old gas pumps. Something about them pleases me. I think of them as elder statesmen. When I see a proud old pump, its dispensing days behind it, I feel a tinge of sadness. It’s been put out to pasture.

I have a long history with gas pumps, and you do too. Ever wondered how many hours you’ve stood by a gas pump over the years? The answer is plenty. Ever worked at a place where one duty was to pump gas? I have.

My first job was at Goolsby’s store on Georgia Highway 47 bagging groceries, stocking shelves and pumping gas. I liked how the old pumps clicked off increments as gasoline flowed into cars and trucks. I liked, too, the glass bubbles where gas swirled around. “Glass must be full before delivery.” And who can forget the old pumps with glass globes. Old pumps amount to works of art. I’ve had a fondness for old gas pumps ever since.

Only once did pumping gas concern me. Down at Goolsby’s Store, I pumped regular into a car whose owner wanted “high test.” The way he reacted to receiving regular made me think I had mixed nitro and glycerin and his car would explode when he started it up. Of course, all was fine. 093 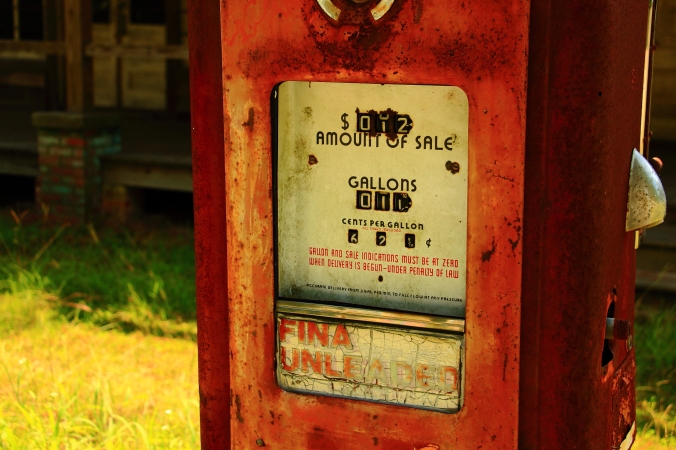 Back in my early years of driving, an old pump often got the last dollar I had. I got my money’s worth though. A dollar’s worth of gas would keep me rolling a long while. Not so today. Today’s gas prices vary wildly from day to day, and any excuse is justification for shooting up the price nineteen cents a gallon overnight. Back before all this global concern shifted logic upside down, the old pumps were stalwarts of stability. Not so anymore.

No matter the price of gas, you must admit that gas pumps serve an indispensable role in life. We can’t get very far in our mobile society without them. Having said that, let me add that I don’t care for the modern digital pumps that put on the breaks [brakes] as you near the end of your purchase. The last gallon takes as long as the previous five. And most of all, I absolutely detest the pumps where an ad plays as you fill your vehicle. Mute them.

The old pumps had class. They weren’t half pump and half robotic salesman. My Granddad Poland had a stately old pump down on his farm. It provided the fuel that his tractors, trucks and cars needed. It’s been gone for decades, but I can lead you right to the spot where it stood. That pump and a few others fuel my interest in abandoned stores and old farms. To this day, when I spot a lone pump at a shuttered country store or what was once a farm, I try to get close and read the price of gas per gallon off those old dials. 016

In Mount Carmel, you’ll find an old pump that has gas at exactly twenty-five cents per gallon. I like this old pump a lot. I even like the warning that it contains lead; that was to keep cars from knocking. I like the old Esso tiger on the front. “Put a tiger in your tank.” Remember that? Of course, Esso became Exxon. Once known as Standard Oil (“SO,” see?), Esso changed its name to Exxon when other Standard Oil spinoffs complained about the use of Esso.

Stopping to check out an old gas pump can lead to interesting tales too. I discovered a story in Edgefield County about a mule kick that killed eight people because I stopped to photograph an old gas pump. I’ll share the introduction. 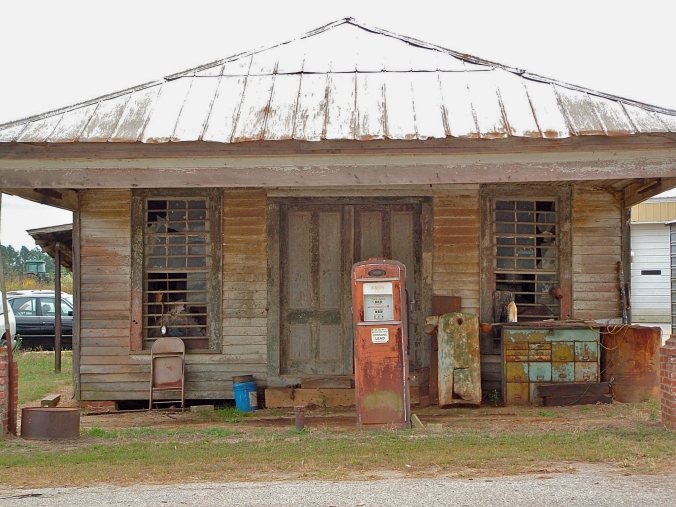 You can drive by a place a thousand times and be unaware of its history. Such was the case for a small country store on Highway 378 in Edgefield County. Over the years, I’ve passed the little store plenty of times and not once did I stop. That changed Sunday, October 13. I did pass it, but I turned around and went back, curious to see what the price of gas was on the old rusty pump.

I got out with my camera, and a classic RC Cola sign immediately distracted me. Behind it was another vintage sign advertising Camel Cigarettes. American Pickers would like this place, I thought. I moved closer to get a good shot. That’s when a man slipped up behind me.

“If you think I’m selling those signs you’re wrong.”

Startled, I said, “No, I just wanted to photograph the old gas pump and the signs caught my attention.”

“People try to buy them all the time.”

“It’s a wonder someone hasn’t stolen them,” I replied.

“Maybe I’ll file off the nail heads,” he said and then he paused. “My granddad got killed in that store.”

And then the most incredible story unfolded, a story that goes back to 1941. The little store at the intersection of Highway 378 and Highway 430, a road that leads to Edgefield, a road known as Meeting Street, holds deep, dark secrets.

It’s unlikely I’d have stumbled onto that story had I not stopped to photograph the pump at the old Timmerman store. Like the pump in Mount Carmel, the Edgefield country store pump was rusty red.

I like this old pump, too, because the penetrating smell of gasoline has given away to the sweet smell of honeysuckle. Every now and then, as I ferry across the Savannah, I detour off Highway 378 to check on this Mount Carmel survivor. I expect it to continue to age gracefully, and I expect the honeysuckle to encase this veteran of another era in green and yellow as springs come and go.