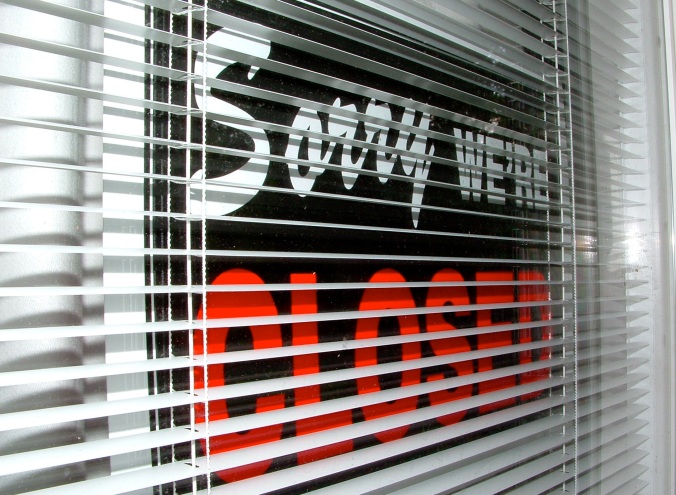 Wednesday afternoons have long been sacred in small towns. Round about noon places close and the infamous slow Southern life style crawls to a stop. How did this custom begin? Nothing clearly explains how the tradition started but a few theories are out there.

Farmers would come to town Saturdays to buy supplies and transact business. Stores opened half a day Saturdays to accommodate the farmers. It was the week’s biggest payday.

Wednesday was a night for church and prayer meetings, and years ago a big dinner around 5:30 preceded the evening service. Folks needed time to cook and get ready for church.

Another explanation is the fact that stockyards had their big auctions Wednesday afternoons and anyone with market-ready cattle headed to the stockyard. Put all three together and you have good reason to take the afternoon off.

Still, after reading these reasons I still wasn’t sure why Wednesday ended up being “the day.” I appealed to my Georgialina readers for answers. Here’s what others have to say.

McCormick South Carolina’s Bob Edmonds: “In farm-based towns in the early times merchants were open 12 to 14 hours on Saturday. The Wednesday afternoon closing gave them a break.”

Lincolnton, Georgia’s Daryl Bentley, said, “I was always told by Dad that small town communities enjoyed Saturday as the main business day when country folk came to town for their shopping. Taking a half of a day Wednesday prevented businesses from having to work six full days a week.”

Brenda Holloway Sanders of Lincolnton said, “I always thought things closed on Wednesday because of the cattle sales in Washington and something about bankers having to be there to approve money for the purchases.”

Carol Nabers: “When I was younger, Newberry closed at noon on Wednesday afternoons.” Author and Rome, Georgia, native Batt Humphreys grew up in Shelby, North Carolina. He offers an explanation I’ve heard more than a few times. “It was all a construct of the doctors and bankers to get tee times and play golf mid-week, at least, in my small town.”

Having an afternoon off had to make the week pass easier for workers. As for shoppers, it was something that was just accepted and no one complained. Not so today. I overheard a person from up North griping about life in a rural outpost.

“Apparently it’s a Southern thing to close stores, banks, and utility companies Wednesday afternoon. Let me tell you it’s mighty inconvenient if you’re not used to it.”

In Lost in the Cosmos: The Last Self-Help Book, Walker Percy, writing about a small town said, “Home may be where the heart is but it’s no place to spend Wednesday afternoon.” Percy was born in Alabama and lived in Louisiana but his words better suit transplants.

It wasn’t a bother unless you didn’t plan ahead. Back in the 1950s and 1960s we all knew the stores would lock doors come high noon. Not so today. Things are changing. In some small towns you can shop Wednesdays. Blame the chain stores. Blame malls and blame the Internet’s online shopping. Blame a bad economy. I can tell you though that we need Wednesday afternoons off.

Laverne Story of San Antonio, a reader with family connections to my hometown, wrote me. “Having Lincolnton shut down every Wednesday afternoon was always an endearing oddity to me. That was something unheard of in Maryland where we lived and was something my brother and I associated with Georgia, in addition to old houses and barns, red dirt roads, wood stoves and outhouses.”

She continued, writing, “I thought it was interesting you quoted my first cousin, Darryl Bentley, who said his father gave the business man’s point of view. I always thought it was so Aunt Ruby could go shopping in Augusta! I’m sure there was a mass migration from Lincoln County on Wednesday afternoons by the majority of housewives. Ask your mother.”

And then she wrote that she “laughed out loud” when she saw the City Pharmacy’s advertisement “NOW OPEN UNTIL 5 P.M. ON WEDNESDAYS” on the same page as my column, “Closed At Noon Wednesdays.”

I hate to see my hometown turning its back on this custom. I say keep Wednesday afternoons sacred. Consider it a gift. So, what can you do with a free afternoon every Wednesday? Plenty. Take care of things around the homestead. Visit family. Devote time to a secret longing: paint, write, study photography, learn to play the harmonica, do something, anything, constructive. Or … do nothing. Rest.

I fear small towns—those strongholds of “Closed Wednesdays”—will see this fine tradition fade as stores chase the almighty dollar and yet another part of the Southland slips away. I hope we keep the tradition alive.

It’s a hazy afternoon. The Dog Days of August are in full swing. Storm clouds crowd the horizon. As cicadas sing their summer song the old courthouse clock starts to strike. As the twelfth stroke rings out, store lights go off and locks click shut. “Open” signs are turned to “Closed.”

Streets and sidewalks empty. A few cars head out of town. One has old-fashioned cane fishing poles and a newfangled rod and reel sticking out the window. No storm will stop this old fisherman and his grandson. No sir. It’s Wednesday afternoon, a bit of Saturday come early, a bit of mid-week freedom that’s priceless. And down on Soap Creek they say the crappie are hitting Little Cleos and the bream, well a cane pole and worms might catch a few.